As briefly discussed in Support Your Local Designer, Winston-Salem is getting a brand new baseball stadium, and with that, a revamped Chicago White Sox affiliate team. I live with a sports guy, so since my arrival to Winston-Salem, there has been great speculation as to how this project will affect the city. And of course, I’ve wondered how this team will be branded.

Last Thursday we all found out. The team name, and its accompanying logo were unveiled to the public. (Read press release here)

First off, Kudos to event organizers for involving the community in these early stages (and for free!) The announcement was made party-style in downtown’s Millennium Center. Sadly, I could not attend myself, but just knowing the event occurred earns my respect.

But this is a design blog, so let’s talk marketing specifics:

The Name: Back in April, the Baseball Downtown group opened the naming to the public in the form of a contest. They received 3,000 names through July and narrowed it to ten–many of which abandoned the city’s roots (i.e. not tobacco-related) and referenced new era ties to the city. “The Dash” is a nickname for Winston-Salem, referencing the hyphen between Winston and Salem. As franchise President Kevin Terry put it, “Dash is a name that is associated with the community – it brings Winston-Salem together – the logo is unique, compelling and provides a lot of opportunity for integration in our game entertainment and fan participation.”

I’ve got to agree! I think ‘The Dash’ is unique for a sports team, and something the city can own, which is very in line with this project’s goals. I also enjoy the double meaning of athletic speed. I’m into it. (But I welcome comments from community members who disagree! How do the people who’ve lived in Winston-Salem for longer than 4 months feel?)

The Design: It’s pretty cool that little Winston-Salem gets a logo designed by Terry Smith, a renowned sports logo designer who has worked with EA Sports, Adidas, NHL, MLS, and many more. But what about the insane amount of talented designers right in our own city?! I understand the marketing draw to work with one of the best, but it does not seem in line with the point of the Baseball Downtown project to ignore the huge community of capable designers here. Perhaps I could get over this if I loved the logo. I enjoy it enough to proudly wear it on a tee for opening day, but I do have a few issues worth noting:

– Are the letterforms smushed? The typeface that “Dash” is set in is not a natural italic, and perhaps had a taller x-height than the designer desired. Whatever the reason, the teeny serifs bug me, and I think a more solid italic sans serif would stand up better (no pun intended!)

– I’d be interested in the creative rationale behind the color palette, but aesthetically, I like the red and purple, most specifically the red trail of the ball behind the word. Actually I love that little touch, and it plays out well in shorter variations of the logo as seen here on caps. But I could do without the whisps through the word itself. There are too many so that they detract from the impact of the word itself and intrude on the readability. Again, on the caps, the solid purple letters stand out best. 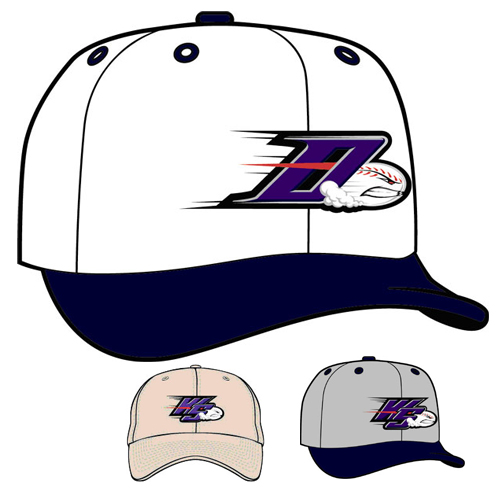 – Lastly, is there a resemblance here? I kid. The Dash baseball is way fiercer :o)

I look forward to seeing how this brand unfolds (bring on the new website!), and I especially look forward to learning more about the mascot, because right now I’m experiencing a little bit of a disconnect. It’s a work in progress though, and we’re all along for the ride.

2 Replies to “New Logo in Town”